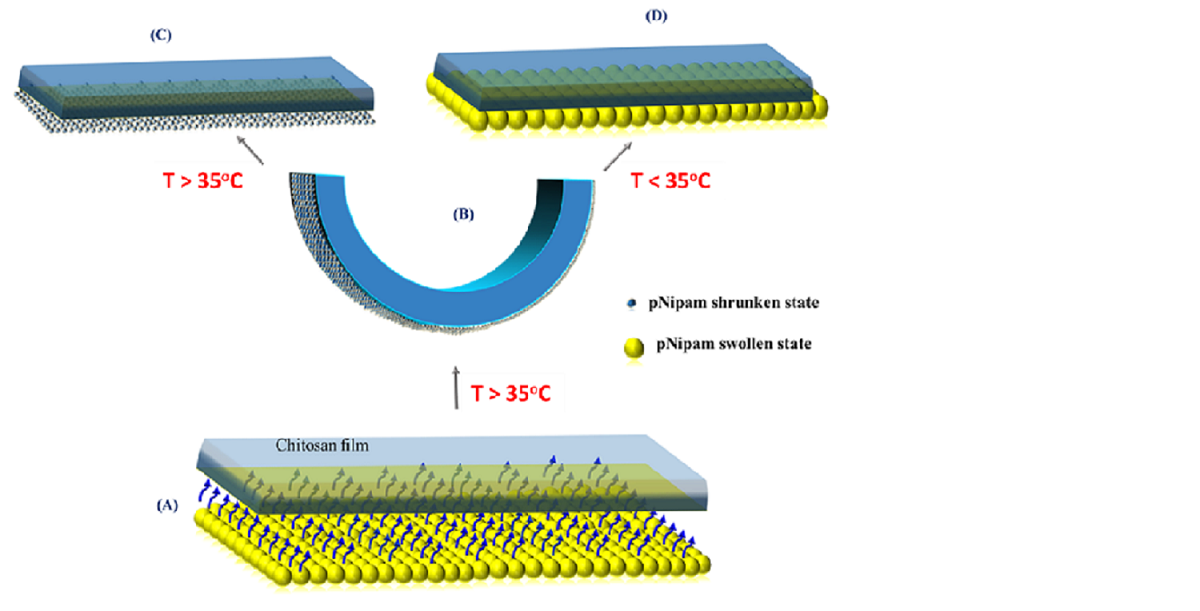 Imagine a world where the machine repairs itself, the clothes clean themselves and medicines release themselves in the body when they sense your altered physiology. Sounds great? Well, the good news is that such a world is just around the corner! All this will be made possible by the use of smart materials which undergo a change in response to a stimulus.

Given their wide applications, researchers worldwide are racing to discover and develop smart materials which can keep the humans and their devices in a fixed order. The field of smart materials, particularly polymer based ones is largely inspired by the biological systems which heal and adapt after acted upon by an external force. The scientists are working to unravel the responsive nature of various materials as they can open up avenues for a gamut of applications. So far, various materials which are responsive to electric charges, light,temperature, mechanical stress, and chemicals have been discovered or developed by the researchers which have been put to various uses in our day-to-day life. .

Working on similar lines, Prof. Pijush Ghosh and his team from the Nanomechanics lab at IIT Madras are trying to engineer temperature-responsive polymers. In their latest feat, the team has reported the development of a bilayer which changes its shape beyond 35 degrees celsius. Interestingly, the bilayer returns to its earlier shape when the temperature goes less than 35 degrees celsius. This reversible nature of newly designed bilayer makes it suitable for applications in the field of biomedicine and smart textiles.

“The thin films developed by our group are made up of polymers that can change shape (morph) of its own or acquire shape on their own when they receive trigger from outside. As these polymers are biodegradable, they do not cause any environmental hazard. These biodegradable, externally triggered polymeric thin films can be used in various applications where particularly metallic contamination is necessary to be avoided; low gripping force to be applied; no external intervention can be afforded and adaptation to confined or narrow space is necessary,” says Dr. Pijush Ghosh, Associate Professor at IIT Madras who leads this study.

In this study, the researchers made a bilayer of two polymers, i.e. N-isopropyl acrylamide or Nipam and Chitosan. While Nipam is thermoresponsive in nature, the Chitosan is known to change shape triggered by a solvent such as water. For this study, the team first synthesized microgel particles of N-isopropyl acrylamide or Nipam, and tested their response to temperature. They found that when the temperature is lower than the lower critical solution temperature or 35 degrees celsius, the Nipam hydrogel is in the swollen state. However, when the temperature rises above 35 degrees celsius, water is released from the Nipam gel.

“This bilayer can be utilized in developing grippers,wrappers, actuator, sensors and bio-valves. Specific applications include the designing of smart sport shirts with arrays of these films which can vent in the air when either body temperature goes high or sweat level goes up. A smart curtain is another area of application, ” adds Prof. Ghosh. To demonstrate the application of this bilayer, the team also designed a butterfly structure which flaps upon exposure to the temperature. The butterfly has bilayer only on the body and not on the wings. They showed that the wings flap when the temperature is more than 35 degrees celsius. Moreover, the team also added a thermochromic dye in the material due to which the temperature change also gets confirmed by the change in colour of the layer.

“In my opinion, the work conducted by Dr. Ghosh’s and collaborators is of interest for those researchers and professionals involved in materials science and engineering but also contributes to the biomedicine sector. Stimuli-responsive materials are becoming a topic of great interest and here a simple but robust methodology to tailor the shape of Chitosan films is presented. The potential applications of the developed materials are clear, especially in the biomedical sector, acting as carriers or sensors. In addition, I consider that the obtained materials could be of interest in the development of other devices where stimuli-responsive is required, such as the integration of sensors and actuators in electronic devices. I would like to give special recognition to the researchers, who have contributed to materials science in an excellent and rigorous manner,” commented Dr. Marc Delgado-Aguilar, a researcher at the University of Girona, Spain, who is not connected with the study.

In future, the team aspires to experiment responsiveness of more solvents on the developed bilayer and look out for materials which are triggered by multiple stimuli like light and solvent. The team also aims to build a small device which can sense the set temperature and function as gripper which can be used either to transport material in a confined space or hold some delicate tissue for manipulation.

Article by Aditi Jain
Link to the article:
https://pubs.rsc.org/en/content/articlelanding/2020/sm/d0sm00020e/unauth#!divAbstract