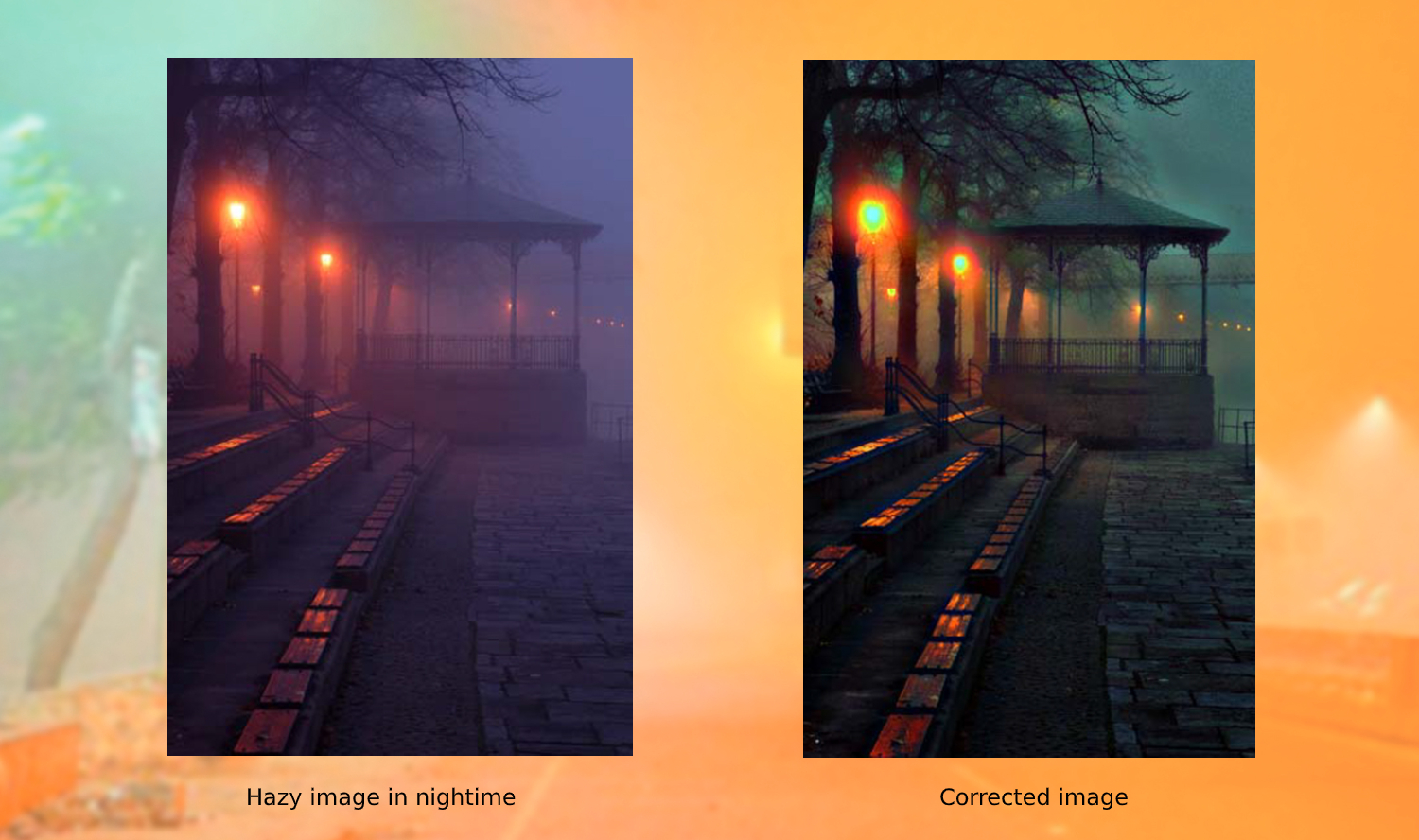 We no more live in a safe world! Unlawful activities like terrorism, kidnapping, theft, rapes have increased significantly in the recent days as compared to the last decade. To handle such menaces, an efficient surveillance mechanism is required by law enforcing agencies to ensure the safety of law-abiding citizens. One of the important tools to fight crime is video surveillance through security cameras. Be it hand-held, installed as a CCTV camera on the streets or mounted on drones, the device helps police to prevent unlawful activities and solving crime cases. Now-a-days the use of security cameras is not restricted only to the police. Rather they are frequently used by the common people to ensure the safety of their loved ones and belongings.

Although cameras are most helpful in providing the evidence of a crime, they can betray us on a foggy or hazy day. This is because akin to our eyes, the visibility of a camera too goes down on a hazy day rendering it difficult to take a clear picture or to capture a clear video of a scene. To handle such an issue, a research team led by Dr. A.N. Rajagopalan, Professor at IIT Madras, has found a solution to this problem. In their recent research published in the prestigious journal of IEEE Transactions on Image Processing, they have proposed a new approach to increase the visibility of an image which got degraded due to haze. “Most computer vision applications including surveillance, terrain classification, autonomous navigation, etc. require highquality pictures and haze can severely undermine performance. Image de-hazing is beneficial even in personal and public transportation systems. Reducing the effect of haze is a very challenging problem, more so when only a single observation of the scene is available”, explains Dr. Rajagopalan, who leads the study.

The haziness in a scene as experienced through our eyes or as captured by a camera has a lot to do with how a human or a camera perceives an object or a scene. The light first falls on the object and subsequently some of it gets absorbed by the object itself, and the rest is reflected back. The viewed or recorded image should ideally reveal the original colour contrast and brightness of the scene. However, the medium between the object and the camera can decrease the amount of light which reaches the camera. The particles in the atmospheric medium reflect ambient light which gets added to the directly transmitted component to produce a hazy effect in the captured image. When there is haze or fog in the air, the suspended particles block the reflected light causing a shift in colours and poor contrast. To add more, this also sometimes createa white veil that results in bad picture quality.

To solve this issue, Prof. A. N. Rajagopalan and Srimanta Mandal have devised a post-processing technique to mitigate the effect of haziness. To do this, the scientists modeled portions of haze in the image from the standpoint of the image formation process itself. They worked to correct specific aspects responsible for haziness in an image viz. the decrease in intensity of light and change in image colour due to haze. They based their research on the premise that if an image is considered as comprising of several local patches, then the similarity with the neighboring patches must relate to the similarity in-depth of the image as well. In case there are abrupt changes in patch similarity then it will typically imply change in-depth information too.

The scientists state that as the degradation of image quality due to atmospheric conditions increases with depth, the patch similarity within a local neighborhood can be used as a measure to estimate the parameters of a model that captures the effect of decrease in intensity of the image. The parameter corresponding to haze component is computed by using non-local mean of patches which show abrupt changes. Using a similar approach, the research team was also able to remove haziness in images taken in night-time or even underwater.

“Given a hazy image, the challenge is to restore the original image which means the image should have been recorded as if transmission medium was ideal. Mandal and Rajagopalan have addressed this problem and have provided a pragmatic solution. The proposed method is computationally efficient and produces better results compared to other competitive methods. The technique may find numerous applications including transportation sector; especially those that are affected by fog and haze during the winter days. The work is sure to be labeled as a scholarly one and will definitely be considered as a step forward in the area of computational photography and image processing” says Prof. Bhabatosh Chanda, who is an expert in this area of research and working as a professor at Indian Statistical Institute, Kolkata.

Now that we have a process in place which can yield almost haze-free images, surveillance can be done in a better way especially in winters or in mountainous regions. After this successful research, the scientists are looking at addressing heavy haze and other adverse weather conditions.